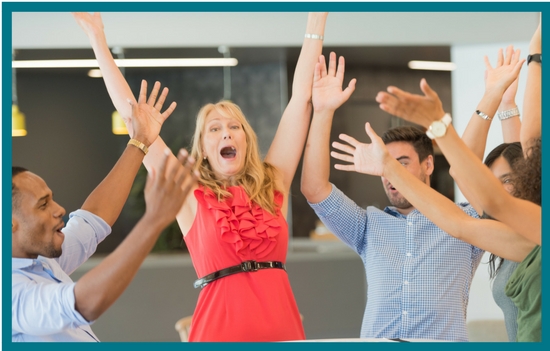 Have you ever been part of a really high performing winning team? What was it like? How did it come about?  What was your part in it? Only once in my career have I had this experience and it was awesome. During our time together, we achieved an incredible amount and we still all support each other years later even though none of us now works for the same organisation. Strong bonds were formed and deep learning took place. What made this team different to others?

If you read my previous blog ’10 steps for creating an Olympic Mindset’ you will already know that I believe that having the right mindset is critical to achieving optimal performance in your career or business. However, what part does teamwork play? Can you achieve success without being part of a team?

Even if you are a micro business or an ‘individual contributor’ teamwork is still an important topic for you to consider.

Those of you who know me will know that I love field hockey! The modern game is faster than the game I played which was grass-based and could be muddy!

The GBR women’s hockey team tonight face the Netherlands in their final match in Rio. Playing for an Olympic gold or silver medal!  I believe that whatever happens they are winners. At the beginning of the Olympics, very few people believed that a medal might be possible so a silver would be excellent and a gold completely awesome! The team has demonstrated such a great attitude and sense of togetherness and are led on the field by Kate Richardson-Walsh who is playing at her 4th Olympics. During the 2012 Olympics, Richardson-Walsh had her jaw broken, yet she returned to play and lead them in their bronze medal match!

So what if you’re not part of a team, maybe you’re a one-man band or perhaps worse part of a dysfunctional team, what does all this mean for you?

Many of us think of a team all working for the same organisation and in a number of physical offices. Yet the increase in the so-called ‘gig’ economy is leading to many more people contracting their skills rather than being employed. In fact, a study by Intuit predicted that by 2020, 40 percent of American workers would be independent contractors and this is happening in the UK and other countries too.  This makes you parts of many teams and so understanding what that means is really key to being able to perform well.

Well, if like me, you run your own business, then, I would ask you to consider revising your thoughts on who is in your team. John Donne said

No man is an island, entire of itself, every man is a piece of the continent.

If you are part of a team that is not functioning well, what are you doing about it? What efforts have you put into changing things? Have you done all you can to try to get the team working effectively? Or have you kept your head down and quietly complained about the lack of leadership and teamwork?

The key factors for a winning team are:

Clear Common Goals – A team starts with a group of individuals with diverse opinions. However, a team’s purpose and performance goals go together and set the tone for the teamwork and behaviour and give a sense of direction.  Without clear and accepted common goals a team is going to underperform.

Effective communication – Communication needs to be two way and free flowing with the aim of bringing about clarity of direction and resolving any issues that arise. The communication also needs to happen to people outside the team who interact and support the team members and with other teams who work alongside.

Strong leadership – High performing teams have a strong leader or captain. Leaders who inspire and demonstrate a commitment to the team. Leaders who role-play the values in pursuit of performance as the way to success.  Former GBR hockey goalie, Beth Storry, recently said of head coach, Danny Kerry.

‘It’s only now in hindsight that I realise his greatest asset is his ability to get the best out of a unit. There’s plenty of quality in the team but Danny is so meticulous in getting them to buy into the team ethic and the unit, in making them become a strong collective. It wasn’t until I left the group that I truly appreciated the power that he gave us as a group. It’s really special.”

Conflict management – conflict can be healthy within a team. However, in order for it to be dealt with it needs to be allowed to surface at the right time and place. There needs to be some agreed rules or process around how conflict is handled.

Trust and Respect – Within a team, there will be a mix of personalities and skills and experience. Collectively they are stronger but only if they are willing to learn from each other. Over time trust and respect grows. The members of the team must be prepared to spend the time to help themselves and others learn and develop different skills.

Let me know what you think below. If your team needs some help, get in touch as I’d love to discuss how I could support you to become a winning team.